All Recessions Are Not Created Equal

With inflation at 40-year highs, the Fed is aggressively hiking interest rates; but it's a tricky proposition: raise rates too much and many fear the next recession is right around the corner. Markets have been reflecting that fear, and while fear is a natural reaction to uncertainty, a look at the past may help provide some reassuring perspective on where we are today. When discussing economic downturns, it's important to remember that not all recessions are created equal.

What Exactly Is a Recession?

A recession is a significant decline in economic activity that can last for months or even years. A recession is typically recognized when the nation's Gross Domestic Product contracts for at least two quarters in a row and is a normal, if painful, part of the business cycle.

Recessions are more common than you may think. Since World War II, there have been 13 recessions, with an average duration of 11 months, according to the Congressional Research Service and Bureau of Economic Analysis. 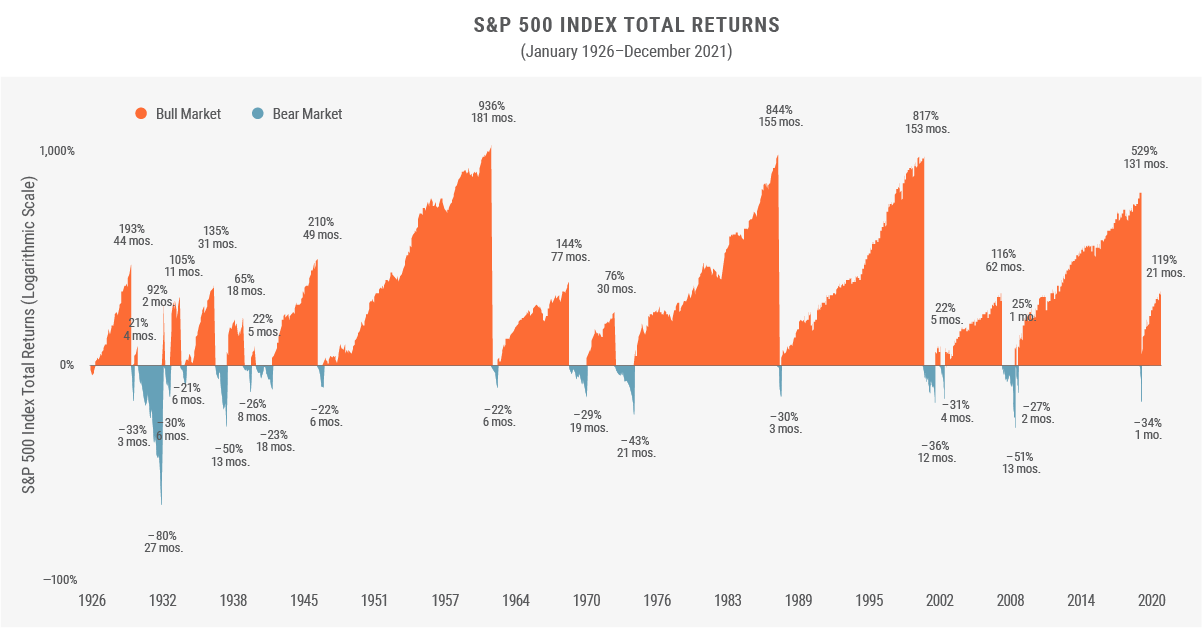 The 2020 recession was the shortest in modern U.S. history. When Covid hit, more than 21 million Americans lost their jobs, and the economy contracted by 33%. This recession led to the injection of massive fiscal and monetary stimulus. Businesses adapted, Americans went back to work, and the economy recovered quickly. Stocks rebounded and hit new highs through the end of 20211.

The Great Recession was the biggest economic downturn since the Great Depression. It began when the housing bubble burst and the financial system was strained. From late 2007 to mid-2009, nearly 8.7 million jobs were lost, and the stock market was down over 50% at one point. After the recession ended, the U.S. economy and stock markets recorded one of its longest-running upswings in history.

After steady economic growth in the 1990s, the U.S. fell into recession for eight months in 2001. This downturn had its origins in the bursting of the dot-com bubble and was exacerbated by the 9/11 terrorist attacks. While more than 1.3 million people lost their jobs, this recession is considered a relatively mild one. Stocks fell 38% through the recession before rebounding and reaching new heights.

In the examples above, stocks are represented by the S&P 500 Composite Index, an unmanaged index that is considered representative of the overall U.S. stock market. Past performance does not guarantee future results, individuals can’t invest directly in an index, and the return and principal value of stock prices will fluctuate over time.2

Where Are We Now?

In the past 20 years, we've lived through three recessions, each with a different cause, duration, and severity. The one constant is that an economic rebound and market rally followed.

While a recession is not inevitable, economists are raising the odds of one this year or next. If it occurs, there are reasons why it may not be severe.

Consumers are not overextended financially, so there may not be an across-the-board downturn in consumer spending. There might be a pullback in goods purchased, like furniture, cars, and clothes, but pent-up demand for services in a post-pandemic world, like movie theaters, restaurants, and travel, are expected to continue, despite a recession. With household balance sheets in decent shape, once inflation starts to trend lower, there's a good chance that spending may increase and economic growth will pick up.

If you are nervous about your own financial strategy and ability to weather a possible recession - reach out. We'd be happy to chat with you and answer any questions you have.

The content is developed from sources believed to be providing accurate information. This material was developed and produced by FMG Suite to provide information on a topic that may be of interest. FMG Suite, LLC, is not affiliated with the named representative, broker-dealer, state- or SEC-registered investment advisory firm. The opinions expressed and material provided are for general information and should not be considered a solicitation for the purchase or sale of any security.

1Stocks are measured by the S&P 500 Composite Index is an unmanaged index that is considered representative of the overall U.S. stock market. Past performance does not guarantee future results. Individuals cannot invest directly in an index. The return and principal value of stock prices will fluctuate as market conditions change. And shares, when sold, may be worth more or less than their original cost.

2Markets are represented by the S&P 500 Composite Index, an unmanaged index that is considered representative of the overall U.S. stock market. Past performance does not guarantee future results, individuals can’t invest directly in an index, and the return and principal value of stock prices will fluctuate over time.

A look at the past three recessions (yahoo.com)

Recessions Happen More Than You Think: Here's What To Know (aol.com)

How Stocks Performed During The Past 6 Recessions (forbes.com)

Next Recession Will Likely Be a 'Mild' One, Economists Say (businessinsider.com)